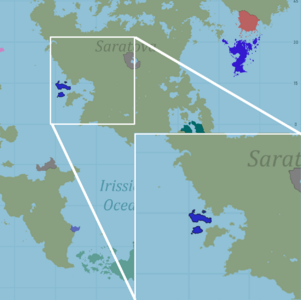 Territories of Turtle Isles with the capital city displayed.
Turtle Isles (officially The Community of Turtle Isles) is a small liberal left nation, containing 9 regions and 1 autonomous republic. The nation currently has a claim on 3 islands on the continent of Saratova.

Many of the nation’s historians estimate that the islands were fist settled in 240 AD, however, there is no evidence to this claim. The first provable settlement was the ꏂꋪ꓄ ꒦ꍏꌚᖘ꒒ꀍ ꏂ ꒒ꏂꋪ꒦ꍏꂦ (Old City of Deneoi), created in 391 AD. After the foundation of Denoi, more settlements started to be created. The civilization was very primitive, only living in shacks made of dried dirt and cow leather. The original civilization has unfortunatelly gone extinct, due to a large tsunami hitting the islands.

After the Tsunami hit, Turtle Isles stayed uninhabited for about 162 years. The 162 years have seen a high growth of animal population and greenery.

After the long time of no human population on the island, settlers from mainland Saratova came to inhabit the islands, which have not been known to them until that point. The new settlers have been way less primitive then the original population of the islands. They had basic knowledge about farming, arming themselves and hunting. They started inhabiting the east parts of the .... Island, which is perfectly fit for agriculture. The descendants of the new settlers inhabit the island to this day. The eastern part was covered in many tropical plants, which remain there to this day, just in lesser numbers.

Nokenian explorers have discovered the Turtle Isles territories for the first time in the middle of December 1375. The recently discovered notes say: "These islands seem valuable, so far we have found some metals and a lot of fertile land." Half of the Nokenian fleet has returned back to their emperor to tell her about the newly discovered lands, which they considered as theirs. The half of the fleet shich has stayed on the island of ... has decided to explore the island, moving east. Eventually, they have stumbled upon a village of Turtleian natives. Nokenians have decided to stay peaceful, and described natives as primitve and unintelligent. When the seconf half of the fleet returned back with more colonizers, they have decided to claim the island they discovered, and started deporting natives into Nokenia as slaves. If they natives didn’t co-operate, they were beaten and tortured. About 75% (76,953) of them were deported and turned into slaves. When all Nokenians returned back to home, they have described the island as a tropical paradise, filled with primitive natives which "need help civilizing". Thousands of Nokenians have started moving onto the island of ... . They have enslaved almost all of the remaining natives.

Retrieved from "https://tl.awiki.org/w/index.php?title=Turtle_Isles_(roleplay)&oldid=2630"
Category:
Cookies help us deliver our services. By using our services, you agree to our use of cookies.