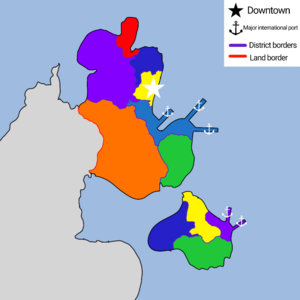 Zoomed in map of Experro

Experro, (or the formal and official name The Borderlands of Experro) is a city state composed of 11 autonomous districts, with a total of 3 embassies abroad, and about 4.8% of government expandature spent on international aid.

It is believed that the name comes from the only lake in this nation, named Experlei.

The first documented settlement fully placed within the lands of Experro was in 1742, which was started by the colonizers from the nation of Eopbi, which have later continued to colonize the whole peninsula and the island, they have heavily invested in the colony, although they have taken about 5x more worth of resources, then they invested.They have started to move thousands of their people into the colony, to start modernization, but also a period of time known as "Eopbication". 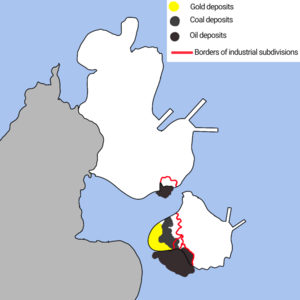 The period of time, known as "Eopbication", was a time where the lands of Experro have seen high developement. While developement had been very high, it came at a price of explotation of our lands, which have a lot of important and expensive resources, such as gold, silver and oil, mostly placed on the island of ยﻮєςєเ. There were about 20,000 tons of gold, silver, oil and other valuable resources. During Eopbication, about 70% of these resources have been exploited and sent off the island into mainland Eopbi.

After about 150 years of exploitation, the people, who were originally from Eopbi, have felt a connection to Experro and it’s lands. They have decided that it was enough of the Eopbian explotation and oppresion, and have decided to start a movement known as єאקєггเ ﻮє ɭєשเשเ. The movement had started with just three members, those being: ภค๓єɭเค ยгɭ๏,єא๏קєς ɭคภг๓ร, гєเ๏ ợยєгɭςє, which are now seen as national heroes . Later on, the movement had grown in popularity, with (at it’s peak) 94,347 members. The group had been kept secret to the colonizers. With the group’s leader preparing plans for strikes and protests for a year, they have decided that it was time to act. On the 3rd of September 1892, all the group’s members went out into the streets. They have managed to sucesfully overthrow the puppet government. However, Eopbi was not giving these lands without a fight.

A week after the protests, the newly established, independent government had announced that Experro is now a sovereign nation, however, as soon as this was announced, the Eopbi army had set out to conquer the colony and bring "peace" to it again. The people of Experoo, not knowing about this, had been celebrating independence. The ships of Eopbi had arrived on the 18th of September in the harbour of ยєאє (not used anymore, seen as a national heritage). The Eopbian army had immiedentally started attacking the people, destroying buildings and starting rampages. The Expperian people had united once again, this time arming themselves with anything that could stop the Eopbians. About a week into the war, adult Experrians had been armed with guns to protect themselves and others. Everntually, after 2 years of fighting, the Eopbians had decided to grant us independence, as there had been way too many casualities.

The palace of ๏קєгเς (main building of the government)

After the bloody 2 year war, Experro was finally granted independence. The officials from Eopbi and Experro had signed a peace treaty.The people once again celebrated, this time without the fear of an invasion happening. The nation had started recovering and building up almost immiedetally. The old palace of the Eopbian royal family had been rebuilt, as it was crumbled after the war. The reason to rebuilding the palace were the plans for the government to inhabit it. After the reconstruction was finnished, the newly elected government had started moving in. As the building up continued, several old landmarks had been rebuild mostly in the district of ﻮєɭ๏เ. 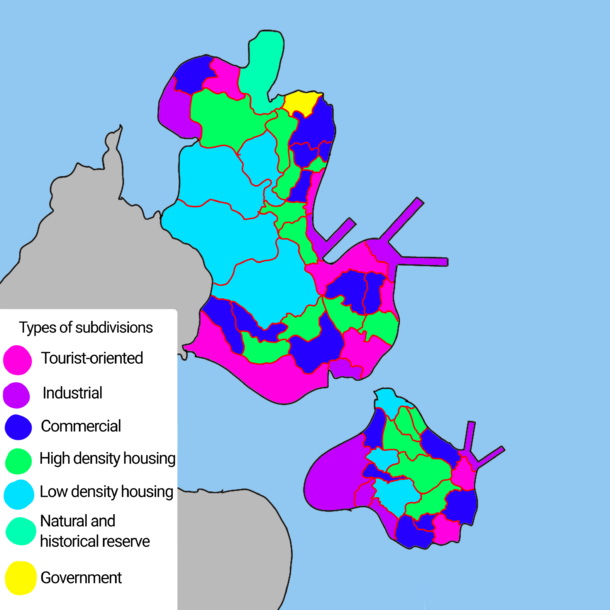 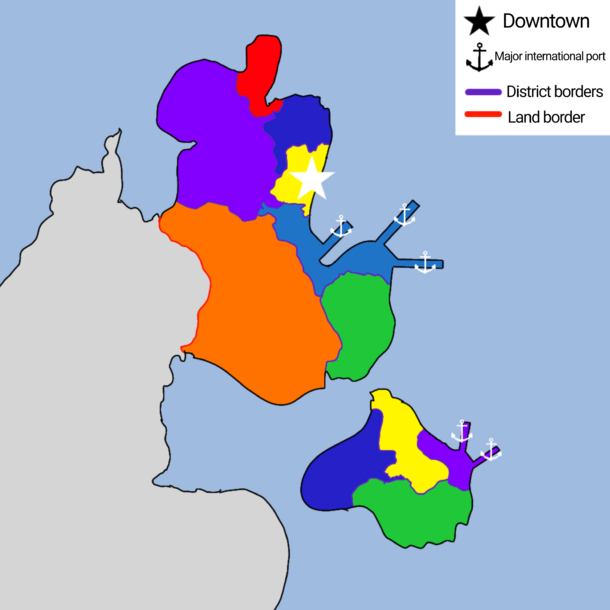 Experro is a generaly flat area, with the highest point being ยเ. єקєฬς, at 734 meter above sea level, located in the eastern part of the nature reserve (єקคςợ ภєยץгє รєשק๏). The only lake, є๒ợเย, is also located in the nature reserve, with the size of 713m². The climate is generally warm, with occasional snow in the winter months on ยเ. єקєฬς. The average temparature in summer is about 30°C, in winter it’s about 10°C with occasional -3°C. The nation’s hospitable climate makes it a relevant and enjoyable destination for tourists.

The Borderlands of Experro classifies itself as a Liberal Socialist Democratic Multiparty Confederation. The constitution states that Experro is a democratic country, with parliament elections every 3 years, PM elections every 5 years and national representative elections every year. The government consists of the parliament and house of representatives. Both of these bodies must be (as stated in the constitution) trasnparent and democratically elected. The person with the highest power in the state is the PM, however, all decisions done by the PM must be approved in the parliament, with 2/3 agreeing, otherwise the proposal is automatically thrown out, and is either redone, or not brought up again.

The Borderlands of Experro could be classified as a parliamentary democracy with elements of a direct democracy. The National People’s Parliament composes of 500 seats. Most of these seats are dominated by the party of democratic socialists (кєгשɭєย รɭยคש๏) currently occupying 273 seats. The green party (ฬєςยɭค) usually comes second, with (currently) 127 seats. Next is the center right party (ςђợเɭ ς๏๓ย) with (currently) 57 seats. Usually coming in last place is the party of independants (ภשєгเย๓) with (currently) 21 seats. Then come the other smaller parties, currently occupying 22 seats.

The Experrian economy is slowly developing. The country revenues 232 billion Xpers a year. The most contributing industries to the economy are: Information Technologies, Retail, Door-to-door insurance sales. Tourism is also a high contributor.

Retrieved from "https://tl.awiki.org/w/index.php?title=Experro_(roleplay)&oldid=2685"
Category:
Cookies help us deliver our services. By using our services, you agree to our use of cookies.