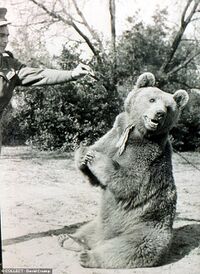 Wojtek the Bear, the chosen animal

The 5th Culture Competitions was the fifth regional design event held in The Leftist Assembly, hosted by Minister of Information Argentigrad from 18 October to 1 November 2019. The event was held to select a new regional animal, anthem, and flag.

To be eligible to vote, a nation must either be a World Assembly or Military Voting citizen, meaning a resident in the region that is either a member of the World Assembly or registered as actively participating in a leftist or anti-fascist military.

Voters were asked to rank every submission on their ballot for each contest.

The single transferable voting system is used, where the primary votes of all submissions are tallied, and the submission with the least votes is eliminated and their votes preferentially distributed until one submission achieves a majority.

The submissions can be found here: https://imgur.com/a/Af9tfC8

Wojtek the Bear was elected as the regional animal in the second round with a tiebreaker on first preferences.

The submissions were as follows:

The Internationale (Instrumental) was re-elected in the sixth round with a majority.

The submissions can be found here: https://imgur.com/a/BUQtJLW

Rosy Red was re-elected as the regional flag in the first round with a majority.

Retrieved from "https://tl.awiki.org/w/index.php?title=5th_Culture_Competitions&oldid=187"
Cookies help us deliver our services. By using our services, you agree to our use of cookies.